Applause for Dr. Oz ..., but forget the Fridge Test! 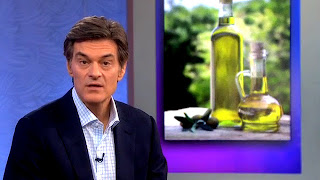 Another Oprah Winfrey success story, Dr. Mehmet Oz, delivers a daily dose of sound health advice via his widely-followed network television show.  In a recent four-part series, Oz “lifted the curtain” on supermarket fraud revealing that 65 percent of the food he dubs “youth in a bottle” -- extra virgin olive oil -- is phony.   It is now widely known that true extra virgin olive oil (“EVOO”), the cornerstone of the Mediterranean Diet, has a range of important health benefits.

The February 11th show featured Dan Flynn, director of the U.C. Davis Center for Olive Research and Shaun Kennedy, director of the National Center for Food Protection and Defense.   Kennedy indicated that many of the imports on grocery shelves aren’t even olive oil and instead are cheap alternatives such as sunflower, hazelnut or industrial oil dressed up as EVOO to capitalize on the profitable United States market.  Dr. Oz was stunned that fake EVOO sales are as profitable as cocaine.  Of course, it is much cheaper to produce than cocaine and the penalties for violation very minor in comparison.

·         Purchase in (or transfer to) a dark glass (or metal) container*
·         Store away from light and heat
·         Locate a harvest date on the bottle (or verify when purchasing in bulk) and purchase within 15 months of that date
·         Look for a quality seal like one from the California Olive Oil Council certifying that the oil has passed chemical analysis and objective tasting criteria.
·         Check the production site on the packaging because oil is often produced in one country and packaged in another (e.g., produced in Tunisia and bottled in Italy is not “Italian EVOO”).

Dr. Oz’s own test for determining if an olive oil is extra virgin – verifying that it solidifies in the refrigerator- is not, however, a good measure of extra virgin quality.  The North American Olive Oil Association called the home refrigeration test “completely false and misleading.”  Certain factors can affect whether an oils solidifies under refrigeration such as olive variety and harvest time.  Many quality EVOOs will not coagulate when refrigerated, but they still offer great taste and tremendous health benefits. Even some olive oils that are adulterated will solidify under refrigeration.

Olive oil education is widely available today from producers and independent retailers.  With fraud profitable and rampant, ensuring that you are getting a true extra virgin olive oil has never been more important.

*Parenthetical added by author
Colleen McCall is the General Manager of We Olive Ventura, a retail store on Main Street specializing in COOC-certified extra virgin olive oils.
Posted by We Olive Ventura at 9:26 AM No comments: